Rishi Kapoor passes away at 67; Bollywood stars and politician mourn on actor's death


The actor from kapoor family enter bollywood in 1973 with 'Bobby.' After being diagnosed with cancer in 2018, he underwent treatment in New York for almost a year.After coming back to india he avoided attending public function. 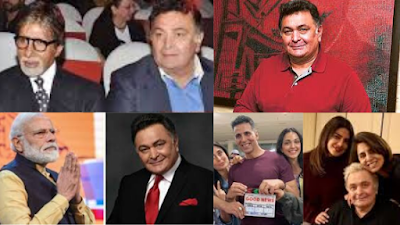 All from actors to politicians including Prime Minster Modi has mourn the actor's death. Amitabh Bachchan wrote that this information "destroyed" him, Akshay Kumar termed the news "heartbreaking." Rajinikanth prayed for his "dearest friend" to rest in peace.

Multifaceted, endearing and lively...this was Rishi Kapoor Ji. He was a powerhouse of talent. I will always recall our interactions, even on social media. He was passionate about films and India’s progress. Anguished by his demise. Condolences to his family and fans. Om Shanti.
— Narendra Modi (@narendramodi) April 30, 2020

It seems like we’re in the midst of a nightmare...just heard the depressing news of #RishiKapoor ji passing away, it’s heartbreaking. He was a legend, a great co-star and a good friend of the family. My thoughts and prayers with his family 🙏🏻
— Akshay Kumar (@akshaykumar) April 30, 2020

Pained to know about the passing away of legendary actor Rishi Kapoor ji. He was an institution in himself. Rishi ji’s demise is an irreparable loss for Indian cinema. He will always be remembered for his exceptional acting skills. Condolences to his family & followers. Om Shanti
— Amit Shah (@AmitShah) April 30, 2020